The Mechanics Behind Investing in Convertible Notes


Historically, traditional debt and common equity have been prominent investment instruments used by venture capitalists. Gradually, preferred equity took prominence due to the various safeguards and benefits it offered. Post the dot-com boom, investors came up with a new instrument known as Convertible Notes. Primarily used by angel investors, convertible notes have become so popular that incubators such as YCombinator and 500Startups have come up with own standardized convertible note instruments called SAFE and KISS respectively. 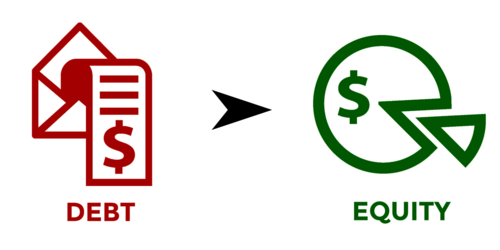 Now what exactly is a convertible note?

A convertible note is primarily a short term debt instrument which can be converted into equity at a future date, typically when a new financing round occurs. Though these notes earn interest, most of the returns are earned by converting the debt into stock, usually preferred.

One of the primary challenges with early stage investing is agreeing upon a valuation of the company. This is further complicated by the fact that some of the early investors are friends and family. A convertible note allows the investors and the founders overcome this challenge by delaying valuation of the company till the next financing round i.e. Series A when the company is in a position to be valued more accurately due to availability of data.

The next question arises is how do convertible note holders generate returns if they are not getting any equity at the time of investment and the interest charged is not high enough to compensate for the risk taken?

There are three mechanisms through which the noteholders earn from their investment.

1. Interest Rate Fundamentally, the convertible note is a debt instrument and earns interest over time. However, unlike traditional debt instruments, the interest is not usually repaid and instead accumulates and is added to the principal value at the time of conversion.

Therefore if the $200k note had an interest rate of 5% and was converted after one year of issue, then the noteholders would convert an additional $10k ($200k multiplied by 5%).

However, as mentioned above, interest earnings are a small portion of the overall returns generated by convertible notes and alone are insufficient to compensate for the amount of risk taken by the investor.

Build your own Convertible model.

2. Conversion Discount The conversion discount is a mechanism to compensate the noteholders for their risk by allowing them to convert the note value (principal, plus interest) at a discounted price compared to the price paid by the incoming investors.

For example, if the investors in a $200k convertible note financing round were granted a discount of 20%, and the incoming investors are buying the company shares at $2 in a new round, then the noteholders would convert the note at an effective price (conversion price) of $1.6 and thus receive 125k shares ($200k, divided by $1.6) worth $250k (125k shares at $2 each).

3.Conversion valuation Cap The third mechanism allows the noteholders to be compensated for their efforts in increasing the value of the startup due to their advise, funds, etc. Basically, the valuation cap puts a ceiling on the value of the startup, thereby permitting investors to convert their loan, plus interest at a discounted price compared to the price paid by the incoming investors.

Continuing with the same example, let’s assume the valuation cap was $1 million and the premoney valuation at Series A is $2 million. If the noteholders invested $200k and the incoming investors are buying the shares at $2, the noteholders would receive a 50% discount ($1 million/$2 million) and thus convert at a price of $1, thereby receiving 200k shares ($200k/$1) which is twice what the incoming investor would receive for his $200k investment. The note would be worth $400k (200k shares at $2 each). (See Table 1)

As you can see below in Table 2, noteholders with simply a discount and no cap would receive a fixed amount of shares irrespective of the pre-money valuation

Thus, noteholders holding a note without a valuation cap

Interestingly, note that even if the valuation of the company is more than $1 million, say $1.25 million, even then the noteholder would receive a discount of 20% and the cap would trigger only post $1.25 million 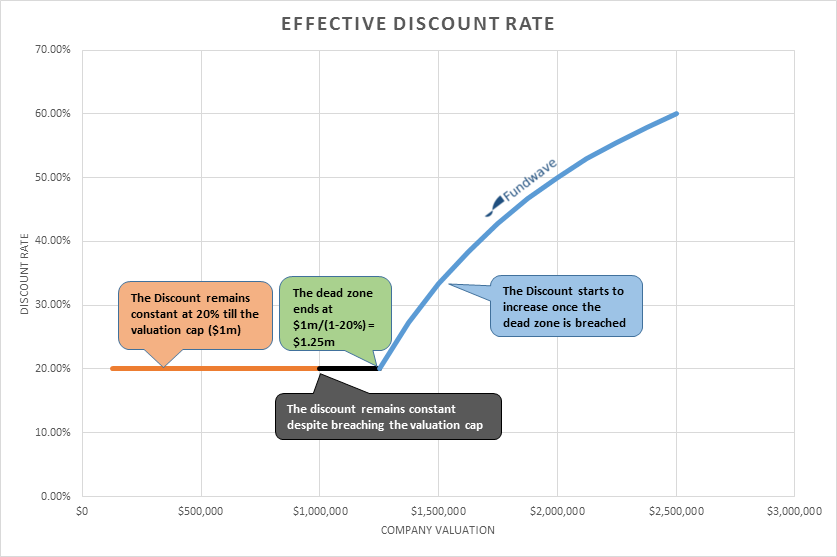 Historically, convertible debt were instruments created in the mid-19th century issued by companies with low credit ratings to keep a lower coupon rate due to its flexible convertible nature. These instruments converted into shares at a later time for a fixed share price. Later on, this instrument was picked up by Venture Capitalists and used as a source of “bridge financing” during later financing rounds. However, the true evolution has come by way of its use in angel investing.

We have tried to explain the basic mechanics of the convertible note and how the discount rate and especially the valuation cap have a visible impact on the shareholding pattern after the next financing round. However, the convertible note valuation also depends on other factors such as the size of the option pool and whether the note is being converted pre-money or post-money.